The Kittydog Trio a part of her friend Crystal or Cruffle 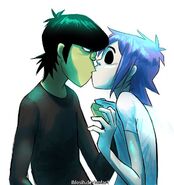 Sashley's alternet version of herself

Sashley's other friends ( Crystal on one side and Cruffle )

Polly ( right ) as an alternet version of herself
Add a photo to this gallery
Sashley's alternet self is older and is an AU of her 7 year version. Not much is known about her but has the same backstory as Crystal but sashley married Xcakes
Retrieved from "https://cto.fandom.com/wiki/Future_Sashley?oldid=119"
Community content is available under CC-BY-SA unless otherwise noted.