none
2D is a male human with no eyes along with blue hair.  He had retired his job as a lead singer in Gorillaz, when he retired  Murdoc did as well. They were both married and had a adopted daughter named Crystal/Cruffle. 2D is mostly popular in the Creatortale comic series. The creator ( Nathywana ) and the Co-creator ( Jaewon ) has confirmed his age is somewhere around 15 or 17 but the Co-creator deicied to have the age 18. He was 17 when he married Murdoc. And despite losing his first husband 7 they broke up because 2D was dating Murdoc. 2D brought his first daughter Sashley with him after and also Alice the mustard pug. 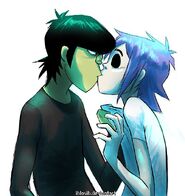 2D being kissed by his husband Murdoc 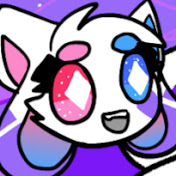 Sashley 2D's first child with 7
Add a photo to this gallery
Retrieved from "https://cto.fandom.com/wiki/2D?oldid=107"
Community content is available under CC-BY-SA unless otherwise noted.